Sunday 31st March saw the first inaugural call by a cruise ship for this year.

The new Mein Schiff 2 is a brand new ship built by Meyer Werft in Finland for Tui cruises, a German based joint venture cruise company of Tui Group and Royal Caribbean Cruises Ltd. The ship was christened in Lisbon on 9 February 2019 during its maiden voyage.

The 111,500 ton ship is a sister ship to the New Mein Schiff 1, which was delivered to the cruise company in April 2018. Both cruise ships feature a length of 315 metres and a width of 36 metres, making them 20 metres longer than their predecessors. The 16-deck cruise ship has 1447 state-rooms with a maximum capacity of 2894 passengers and 1000 crew. More than 80% of the rooms are outside cabins. Latest innovations, state of the art equipment and environmentally friendly con-struction characterise the newest member of the fleet.

The main language spoken on board is German, the atmosphere is relaxed emphasising comfort and good food.

During the summer, the ship will be sailing from Palma de Mallorca, its homeport, on various itiner-aries in the Western Mediterranean before heading to the Caribbean in October where it will be sailing from Bridgetown and La Romana. Gibraltar continues to be an attractive port of call for cruise ships and a destination which has been chosen by Tui cruises in particular, with their consistent calls during the winter months. 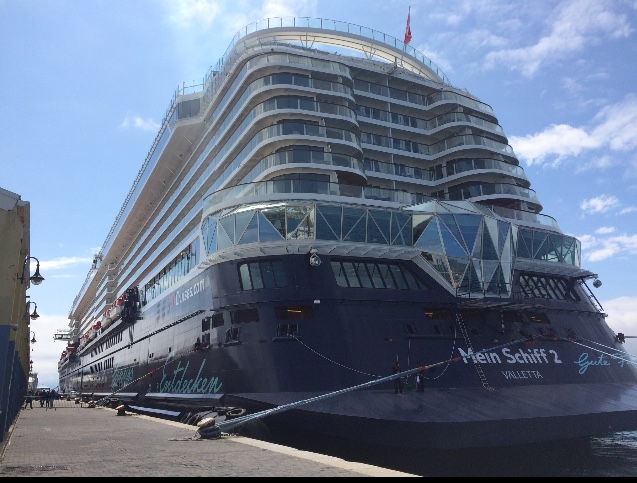